It is four days later and two days until I see the UW Liver Tumor folks. I am, simply both frightened and hopeful as I face this next step. My "cemetery-side" funeral needs are resolved and I am hoping to talk to Mom's minister tomorrow (Tuesday) and both take care of the "ceremony side" of affairs and re-examine my spiritual side.

I spoke with my youngest cousin this evening and asked her to share the news with the rest of her side of the family, particularly my cousin David as he is a bit... fragile. We'll see how that goes.

I have yet to break the news at work yet, and am planning on doing so on Thursday. It is my intent to work as long as is practical (well, unless someone sends me a winning lottery ticket) and to be of service to my family and communities as long as possible. I have projects I want to see complete and obligations I want fulfilled while I am still relatively perky.

I'm already learning important lessons that I hope others can learn from me, rather than from life. Mainly, make sure you have short and long term life insurance and in funereal plan in place well before you need them. Ideally, paid for in advance.

I'm also learning to accept the mind-boggling love I've been showered with since this came up and the offers of support. For someone that has long been influenced by a desire to "not be a bother" and a certain shyness (often overcome with vigorous over-compensation) it's been affirming, heart-warming and tear-jerking - and I am immensely grateful for each and every one of these wonderful people.

For the most part, at least right now, I find myself past the desire to melt down every 10-15 minutes and mostly calm. The "I'm a cancer patient" meme runs through my head with an icing of horror and disbelief way too often, but I seem to be going through a period of calm - for now. There are still teary moments (that thankfully are internal for the most part - I'd really *like* to retain some shreds of dignity), but they are rarer.

That will be all for now. Posting will be irregular. Your mileage may vary.
Posted by Gay_Cynic at 7:00 PM 2 comments:

Beginning a Journey - "Nothing concentrates a man's mind more than the the prospect of being hanged in the morning." ~Samuel Johnson

On New Years Eve I saw my doctor for a check-up. I have diabetes and other issues and so checking in from time to time is medically indicated. Hands were shaken, blood was drawn, labs were sent.

A few days later he called me back and shared with me that the level of a protein indicating some kinds of cancer was elevated in my bloodstream and that he wanted me to have an ultrasound. Thinking this was fairly serious stuff, I promptly said "yes" and went along with the plan and had the ultrasound performed on January 6th. I let my employer know that there were some issues in progress.

It came back clean. I was very pleased and went so far as to buy myself a trinket I'd been lusting after for a number of years, a replica of a Civil War era sword, figuring that dodging a bullet of that magnitude was worth a tiny bit of celebration. I also let the boss know that I'd come back clean and we were both deeply relieved.

My doctor, however, remained concerned at the unexplained elevated protein level and ordered an MRI. The last time I did not take my doctors advice, it cost me, so I again went off to see folks with big machines and high tech and had an MRI performed - but with fairly high spirits.

On Friday, January 10th, I got back the first results from my doctor - a suspicious lesion was present on my liver. He referred me to a hepatology clinic and off I went, deeply concerned. I began to talk with a small group of friends about the situation and to reach out for support, as I was a bit frazzled.

Monday the 13th I visited the hepatology crew...and was diagnosed with liver cancer and given a prognosis of 6-12 months to live, with treatment - becoming symptomatic (i.e., symptoms so you'd notice) in 4 months at the earliest. I was told that like any prognosis of this kind that the numbers were almost certainly wrong that it could be longer or faster depending on just what kind of cancer was present. I was then referred to the University of Washington liver tumor group for treatment, second opinion, and further diagnosis. I was advised to "get all the logistical stuff in order so you can focus on medical."

That's where things are at as I write this. I'm going to keep posting (on this and other matters) as things progress, and it is my intention to do my darnedest to beat the odds. But I intend to keep posting on this topic as long as I can in the hopes that I can offer folks some insights on "how to do this" and, more than likely, "how not to do this."  I leave it to each of you to determine which is which.

What I've done so far? Beyond the whole "run in circles, scream and shout" bit I've notified my younger brother and his wife and their daughters, I've begun the process of making sure that the userid/pw combinations for websites and social media that I created/maintain have been passed on to the relevant folks to ensure a smooth transition, and I've put in place similar plans for this blog and my other "social web presence."

This Saturday I will be making burial arrangements (in case those should those become necessary), and I will be seeking spiritual counsel on a number of matters - as well as arranging a proper funeral, Methodist post-funeral potluck, and a wake for those inclined. Should I be required to make an early departure, it is my hope that my friends and family mark my departure with laughter, gossip and love - not tears and sack cloth.

I begin a journey with two possible endings - either some form of recovery or passage to what I am told is a kinder and gentler realm. I hope and will fight for the first - but am comforted by the notion of the second.

The support of my friends, family, and chosen family has been astonishing and wonderful in these early days. I am deeply grateful for each of them - and lest I be too distracted to do so later want to throw out particular recognition at this point to FarmFam, Scribbler, and MattG. I don't mean to neglect anyone by not mentioning them at this point, but they have really gone (and continue to go) way above the call of duty and I am immensely grateful for their efforts and support and that of others who have also stepped forward with offers of help, support and shared knowledge.

Being Helpful: A Way Out...

Sometimes, when we're in a panic, we do or say things that we later come to regret. Often we then find ourselves backed into a corner by those statements or actions and are faced with what seem like insurmountable challenges to finding a way back to sanity, dignity, or logic without suffering shame, public humiliation, professional  or personal damage.

We face a choice. Grit our teeth, gut it out and walk through the penalty phase - or we can double down and try and drive through at full stupid.

I've usually found that the first option has fewer penalties in the long term, no matter how unpleasant in the short term.

Back to Fannie Farmer and her cookbook of 1896 - so far, each recipe has been pretty straightforward and easy to build. This evening I found myself still a bit off after an excessively interesting Friday - since cooking distracts me, I jumped right in.

This Rice Muffin recipe is a neat way to use up left-over rice - whether from ordering out for Chinese or you just over-estimated how much you needed to make up at the house, this solves the problem and gives you a sugar-free muffin recipe that's kind of reminiscent, flavor-wise, of baking powder biscuits. Very light and fluffy as well.

Note, sugar-free does *not* mean low-carbohydrate. Rice is only slightly better than a teaspoon of white sugar, and white wheat flour is only marginally better than that. If you have carbohydrate issues, think this one through.

That said, the Rice Muffins are yummy if a bit outside the norm. Wouldn't be a recipe I'd beg for, but it's quite satisfying nonetheless and works well to accompany breakfasts, soups, or meals generally. 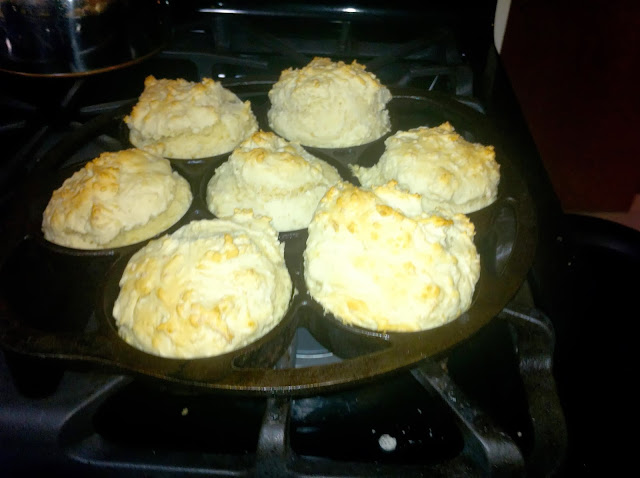 Difficulty: Follow the directions. Yet another easy and reasonably fast recipe.

How close did I stick to the original?: I used the cast iron gem pan (and there was actually enough batter to fill all the cups), and I used the Kitchen-aid Mixer to mix it together. Oven temperature and duration are not mentioned in the original Fannie Farmer, but 375F and 25 minutes is a combination that works - yet again.You can find a decent sifter for dry ingredients at Amazon.

Mix and sift dry ingredients; work in rice with tips of fingers; add gradually milk, egg well beaten, and butter. bake in either buttered muffin rings placed in buttered pan or in well-buttered iron gem pan at 375F for 25 minutes.
Posted by Gay_Cynic at 9:58 PM 3 comments: