But if you don't want to take the GOP down the rat-hole in the name of purity - refuse as a minister and as a church leader (if that is your belief regarding Gods will) to perform same-sex or interracial marriages - some may find your action vile but you are true to yourself and your faith.

After all, Luke 6:42. And then I might suggest that this is an issue that is between God and the participants in such unions (and He is fully capable of issuing any congratulations or condemnations necessary).

Pragmatically, it is just not logistically possible to deport the entire population unlawfully present in the U.S. to their various homelands - and when something is physically not possible, one doesn't need to argue about its other facets. Further, continuing to drive a wedge between the GOP and immigrants is not in the best interests of the nation or the party. Secure the border - then lets talk about how to reform immigration policy.

Regarding abortion (life) find me a logically and factually supportable position on when life begins (heartbeat? pain perception? or?) and perhaps we have something to talk about - but neither "always good and a right" nor "always bad and never a right" are reasonable positions.

In today's world the GOP can either be theologically pure (and scare off many folks of Tea Party, moderate, or libertarian bent) OR the GOP can start winning. Not both.

Given that you appear to suggest hanging a lead life jacket about the neck of the GOP...and the alternative is the Democratic party as led by the Obama faction - I really can't support your efforts at a pragmatic level as a man who wishes his nation well.

As a gay man with hopes of achieving equality before the law in this lifetime, I have some small issues with your stance on same sex marriage and am thus prevented from supporting you at yet another level.
Posted by Gay_Cynic at 7:28 PM 1 comment:

I do believe the bloggers below would beg to disagree...
A Geek with Guns
Recoil Magazine
The Armed Lutheran
Derek Ward Commentary & Wordsmithery

Springtime in the Northwest

Spring this year is a tad random. Sun, rain, wind, a bit more sun, some hail, more rain, and more.

Monday was, shall we say, no exception.

I woke up to overcast skies, drove over to a glorious sunny Monday morning on the East side, and about noon the wind came up and the thunder boomers moved in. It helps to understand that the NW is just a little bit wooded - where there isn't old or medium growth evergreen there's more than likely some decorative tree or another or the ever present water weed, alder (which, coincidentally, a dandy wood to smoke things over). And this isn't just out in the countryside - it's in the cities, too.

When it gets more than slightly windy around here, things tend to get a little more exciting than in less forested environments. Boom in the night is not limited to high explosives and ruptured gas lines - a 140' Douglas Fir makes a real impression when it decides to come visit at ground level. We can usually count on a few houses crunched, the occasional crushed car, and usually at least one tale of high drama involving falling trees, power lines, and either people or livestock.

Monday wasn't an exception. A portion of I-5 was closed north of Seattle because some of those forest giants had decided to take a little lie-down across the lanes during rush hour. The main drag near the house had the top half of a citified deciduous tree of some kind strewn across it. Yet all was well, and I was thinking of grabbing the chain saw and going out into the neighborhood to be helpful as I made my way home.

That is, right about till the time I pulled up in front of the house. About a third of the tree in front had snapped off and dumped in the front yard, barely missing taking out windows, siding, or people. Fun.

Fortunately I now have a plug-in electric chainsaw (it's not gas, but I don't use a chainsaw often enough to justify that). About two hours later... 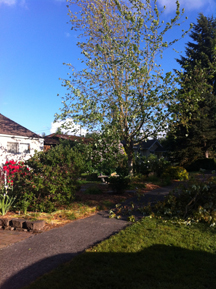 Of course, this means this weekend I have some new activities planned as the center trunk of the tree is now held up by about 4" of wood.....

Anyone need some wood?

As I continue to recover from NRA (a pallet finally landed back in WA this afternoon) and continue to bask in the glow of happy memories from that frenzied fest of networking and fun - and perhaps a wee bit of sheer exhaustion.  That significantly senior colleagues snapped back rather faster than a couple of us younger sorts seems distinctly unfair, but amongst us whippersnappers we're theorizing that they are simply in far better training for this kind of adventure than we are as comparatively travel amateurs. Still not fair, but more likely than the mutant alien theory.

That said, I'm already looking forward to upcoming events. I want to hit Phlegmfest but between dollars and timing, I have doubts of my success - I haven't given up, but a Friday night flight out of Seattle for DFW puts me in at 0500 and fairly wrecked before the festivities even begin...and only a month after NRAAM, the wallet has yet to properly recover. Grrr. Others, more local, may have rather better luck.

Gun Blogger Rendezvous in Reno (September 5-8) planned by the ever-meticulous Mr. Completely promises to be another opportunity for networking, sharing, and exploring the direction things are going on gun issues, gun blogging, and technology - all while supporting Project Valor-IT.

The Gun Rights Policy Conference in Houston (Sept 27-29) looks a fair amount more promising - I'm anticipating that it'll be even more frantic than NRAAM (this will be my first time attending both) with speakers and the opportunity to meet and break bread with a folks ranging from the leaders of the firearms rights community and on to manufacturers, bloggers, grass roots activists, legal experts, historians, economists and more.

Then, to buoy my spirits before the holidays, comes Blogorado - a wee private gathering of Gun Bloggers and associates in an odd corner of the universe known only to a lucky few. I'd say a good portion of the camaraderie found among gun bloggers today originates in this little gathering and Gun Blogger Rendezvous, and at similar events around the country.

NE Bloggershoot in August is on the list of "things I'd like to do" but given what September and early October look like, when considered in light of "20 was a long time back", I think wisdom and fiscal prudence dictate that I think of it in terms of 2014.

After a few days to catch my breath, a some ruminations.

Houston is a really neat town with some amazing food, particularly barbecue (decent barbecue is a bit hard to find in Seattle). The service was pretty but slow at Papa's barbecue, but once it arrived the food was yummy - and that was just one night.

Gun Bloggers are good people. I had the opportunity to meet friends new and old, to hang out with folks I'd only ever chatted with online, and to both teach and to learn - as well as shoot the bull till the wee hours with folks that I'd consider family gladly. Now, if I could just find a way to fit *sleep* in there someplace...

The NRA Annual Meeting show floor is big. If Houston is about average, it's about (for my WA readers) half again to twice the size of the WAC Show in Puyallup. Ended up walking the whole thing 8-10 times each day meeting up with one person or another and trying to do a little business here and there.

Related to that last - bring good walking shoes to 2014. REALLY good walking shoes. I'm thinking losing the boots in favor of a good pair of Ecco's. I've been recovering since Monday and only today are things starting to feel vaguely normal in terms of foot pain.

Getting your group all into the same hotel is a good thing. This is what I call "lesson learned." More on that much later.

Drunken South Africans who've learned their notions of both gun owners and Americans generally from bigoted anti-American media (all too much of it based in the United States) are tiresome but educable. And in general, every time you educate a bigot you make the world just that little bit less stupid.

The NRA convention is one of the friendliest and most polite events I've been to, with folks from all over the world showing up from every path of life - almost all of them polite, and an awful lot of them with similar giggle buttons. There is a distinct sense of "I AM AMONG MY PEOPLE" that only grows stronger when I hang out with the bloggers.

Blogorado will, not surprisingly, always have first place in my heart - however, NRAAM is well worth attending if you find yourself nearby.

A Return To Blogging

I'm sorry I've been away - I've been busy, mostly with fairly good stuff, but the whole "work/sleep/work" thing has kept me a bit busy/exhausted this last little bit. I'll try and do better.