It seems one of the endless number hoplophobic groups of anti-gun bigots is proposing to hijack Valentines Day to boycott Starbucks for not discriminating against law-abiding gun-owning customers and shoving them to the back of, if not entirely off, the bus.

I propose a rather different message - rather than a message of resentment, bigotry and hatred of those more petite, less able, more fragile or simply older'n'slower that have the temerity to attempt to make realistic provision for defending themselves against the two and four legged predators of the world - I suggest a buycott.

A buycott of gratitude, where we go out of our way to spend at Starbucks as enthusiastically as we can - by preference open carrying where legal and practical, concealed carry where it's not, and for those desperate lands of greater and lesser Mordor where carry is not an option for the average peon (for surely they cannot be citizens in such a land) simply spending - but in all cases making a point of thanking counter staff for their corporations stand against bigotry and discrimination against law abiding persons.

Gratitude for the Starbucks policy of corporate courage that states:

While we deeply respect the views of all our customers, Starbucks long-standing approach to this issue remains unchanged. We comply with local laws and statutes in all the communities we serve. That means we abide by the laws that permit open carry in 43 U.S. states. Where these laws don’t exist, openly carrying weapons in our stores is prohibited. The political, policy and legal debates around these issues belong in the legislatures and courts, not in our stores.

On Tuesday the 14th of February 2012, I propose that wherever possible gun folks gather together at a nearby Starbucks and *spend* - buy a coffee, a latte, a pound of coffee, or a dozen coffee makers. It's up to you (and your wallet) to decide what you can afford - but each dime you spend will be a message of gratitude (and market presence of the pro2a crowd) to Starbucks.

I'm going to try and be at the Bellevue Courtyard Starbucks (11010 NE 8th St
Bellevue, WA 98004) at noon on the 14th for a quad mocha and maybe some whole bean coffee.

A light against the violence.... 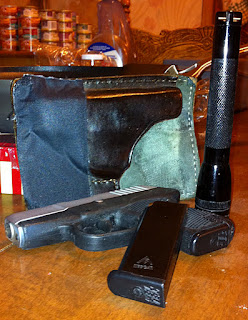 "So the Brady Bunch are planning Candle-light vigils on January 8th to “Stop Gun Violence”. Now many have pointed out what a stupid and pointless gesture that is, also many are noting the dwindling numbers of people willing to come out in the cold with a candle for the sake of their lost cause.

I propose a display that will show we have the same goals, but our side is actually interested in results." - Weerd

Some of us have more than one choice. At one point, for price as well as discretion, the Keltec P3AT (admittedly, unpleasant to shoot...but far better than hurling a cup of coffee) the Keltec was mine.

Now the Keltec is relegated to a secondary role, carried when I'm likely to be dealing with folks that, if exposed to a visible and lawfully carried firearm (even in a holster) are likely to soil themselves.

On Consistency and Rights

Lawdog hits yet another home run with his ponderings on VoterID and civil rights.

Then call your congress-critter.
Posted by Gay_Cynic at 6:36 AM 1 comment: